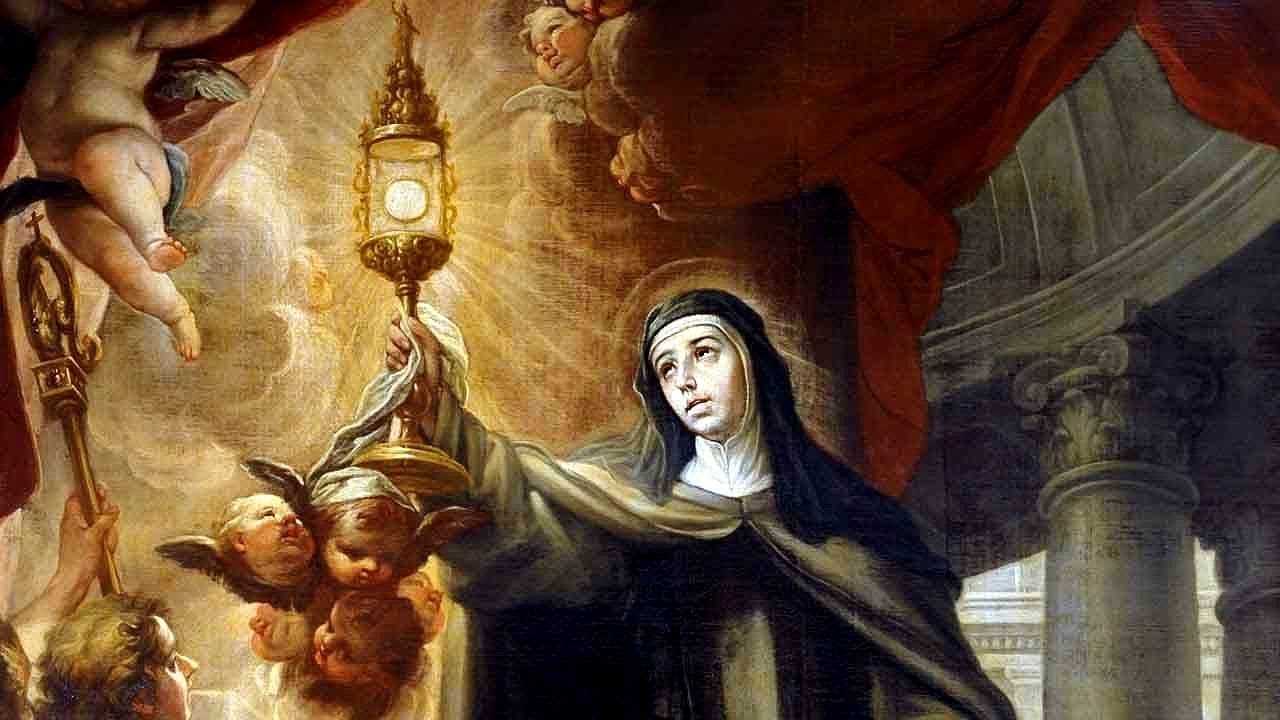 The Story of St. Clare

Clare was born into a noble family in the year 1194, the daughter of Favarone di Offreduccio di Bernardino and his wife, Ortolana. While Ortolana was pregnant with Clare, she went to pray in the Cathedral of St. Rufinus shortly before she was to deliver, and heard a voice predicting, "O woman, fear not, for you will happily give birth to a bright light that will illuminate the world." The baby was named Clare, and she was baptized in that church.

The family atmosphere in which Clare grew up was filled with a great sense of spirituality. Much of her education took place in the Cathedral, which was her local church, being not far from her family home. Even as a child and young woman, Clare was known as holy, being dedicated to prayer, obedient to her parents, and generous and compassionate to the poor. One story describes how she saved food from her family's table to distribute to the poor who gathered outside.

As she grew into womanhood, Clare was pressured to marry, but she wished to embrace a life of poverty dedicated to God. She had heard a young man - St. Francis of Assisi - preaching in the piazzas of Assisi, and as a result became determined to live the Gospel in a more radical way. On Palm Sunday in 1212, at the age of 18, she made her decision. At Palm Sunday Mass, when all the other young ladies of Assisi, dressed in their finest for this special day, processed up to the Bishop to receive a palm branch as was the custom, Clare stayed in her place. The Bishop, impressed, went to her bearing the palm branch. That evening, she went secretly to St. Mary of the Angels, the Portiuncula, where Francis of Assisi and his brothers received her. Here she was dressed in the Franciscan robe, and her hair was cut to consecrate her to a life of penance. She was then brought to the Benedictine sisters of St. Paul, and later to the church of San Damiano.

Other women soon joined Clare, including her mother and sisters, and the church of San Damiano became the mother house for the group; after her death, the sisters became known as the Sisters of Saint Clare, or the Poor Clares. An observer at the time wrote in praise of their "steadfast practice of charity, humility, virginity and chastity, abstinence and silence, patience and contemplation." They lived according to a Rule written by Clare, similar to those written for monks of the time, but the first written specifically for women.

A Life Spent Contemplating the Mystery of God

The lives of Clare and her sisters revolved around a rhythm of prayer, which was the principal activity of their day. Clare's writing show her fascination with the person of Jesus, and "her understanding of life as a continuous relationship with Christ which expresses itself most beautifully in unceasing prayer." She taught her sisters that prayer was simply a matter of falling in love with Jesus. "May you totally love Him Who gave Himself totally for your love," she wrote. "Look upon Him Who became contemptible for you." A book describing Clare's writings describes her focus on prayer in this way: "Intuere, that is, pay attention, focus your gaze upon the suffering Christ. Considera, consider or try to understand the mystery upon which you are reflecting that you may lose yourself in loving contemplating, contemplare, Him. Yet, all the while, she counsels, you should be desiring to imitate Him, desiderans imitari."

The sisters lived in physical poverty, relying on the generosity and dedication of others for their support, trusting in the providence of God. Clare believed that a life without possessions freed one to enter more profoundly into God's mystery, and to connect with Jesus, who was born and lived a life of poverty. In a letter to St. Agnes of Prague, Clare wrote, "O holy poverty, to those who possess and desire you God promises the kingdom of heaven and offers, indeed, eternal glory and blessed life."

While the sisters' prayer life was rich, it was not an easy life physically, and Clare was afflicted almost constantly by illness. For much of the 42 years she lived at San Damiano, she was confined to bed, and it is understandable that the Bishop of Assisi and the Popes of the day tried to convince her to ease her austere practices. While remaining obedient to the Church, she resisted these attempts, convinced of the correctness of her path. On August 10, 1253, Pope Innocent IV gave official recognition of her Rule; the next day, on August 11, Clare died. In 1255, she was declared a saint.

With notes from Clare of Assisi: Early Documents, edited and translated by Regis J. Armstrong. A copy of this book is in the church library.

Why is Clare often shown holding a monstrance?

At one point, an enemy army attacked Assisi and stormed toward St. Clare's convent. She was too ill to walk, but asked her sisters to carry her to the convent gates, where she held up the monstrance (which holds the Eucharist) and prayed to God. Upon seeing this, it is said, the enemy fled, and the convent was saved.

Why is St. Clare the patron saint of television?

When Clare became too ill to attend Mass, it is reported that she was able to see and hear the Christmas Eve Mass on the wall of her room. That's why the bulletin board in the church foyer, which promoted all events surrounding our 100th anniversary, was decorated as a TV screen.