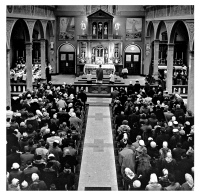 History of Our Parish

In 1908, a group of local homeowners approached Archbishop Fergus McEvay regarding the need to establish a

new parish to serve the area along what was then the northwest border of the city of Toronto, known as Earlscourt District. After a door-to-door survey was conducted of the area, a formal letter was sent through a law firm to the Archbishop along with the report, making a strong case for their cause. Within seven years, "Earlscourt Mission" was transformed into St. Clare's Parish, complete with a grand church, a rectory and a small school at the corner of St. Clair Avenue West and Ravensden Avenue (now Westmount Avenue).

At the turn of the century, Earlscourt District was a rural area that consisted chiefly of market garden properties serviced by dirt roads. By 1908 the land had started to develop into a residential subdivision with storefronts along St. Clair Avenue and rows of single-family homes along the side streets. As the population grew, a need for a Roman Catholic church became apparent. There was at that period no Catholic church or separate school near at hand, and that meant travelling a long distance on rough roads to attend Mass or to receive a Catholic education. The original parish community consisted of 33 Catholic families, mostly Irish immigrants, who helped raise some of the necessary funds through summer garden parties. In June of 1909 a tract of land (nine lots) was purchased by the Archdiocese for $6,400.

At first the mission was under the auspices of the priests of St. Basil's Novitiate (located at St. Clair Avenue and Bathurst Street), who were also in charge of nearby Holy Rosary Parish. Father James Player oversaw the erection of a four-room brick schoolhouse because providing a Catholic education to the local children was a priority. Sunday Mass was celebrated in the school chapel every week. The first Mass was on Sunday, August 14, 1910. The Basilian Fathers remained in charge of the steadily growing Mission until Father Edward McCabe was appointed pastor in January of 1913.

The new pastor oversaw every facet of the church's construction, which progressed rapidly. By summertime the project was well underway. The cornerstone was laid by His Excellency Archbishop Neil McNeil on Sunday, August 17, 1913. Until the church was completed, services were held in its basement. The church was consecrated on November 7, 1915. It is remarkable that construction was finished in such a short period of time, especially since this was all taking place during the "Great War" (World War I), when manpower and funds were hard to come by.

Over the years, the congregation has grown and changed substantially, along with the city of Toronto. In the post-World War II era, new waves of immigrants came to the area, the vast majority of them from Italy, which led to the establishment of Italian masses and a long-standing Italian choir, which are still an integral part of parish life today. With succeeding decades, various other immigrant groups have added their own richness to our community.

Catholic Church remains the main landmark in our ever-burgeoning St. Clair West neighbourhood. Our beloved church has come to be recognized as one of the city's architectural gems not just because of its age and stature, but because it is one of the few houses of worship in Toronto built in the Renaissance Revival style. As a result, St. Clare's Church was placed on the City of Toronto's Inventory of Heritage Properties in 1992.

Romanesque design elements predominate in St. Clare's Church: from its symmetrical edifice with rounded portals to the church's cruciform (in the shape of a cross) shape. St. Clare's also contains an abundance of stained-glass windows. Our patron saint is depicted in the two windows directly over the main altar as well as in a semi-circular one above the main entrance. The large windows in the clerestory (upper level) have been dedicated to the memory of former pastors and parishioners. Four of the clerestory windows in the sanctuary are by Guido Nincheri, a talented and prolific artist whose masterful work can be found in many churches in Quebec and Ontario. The smaller windows on the lower level depict the joyful and sorrowful mysteries of the Rosary. There are several styles of stained-glass windows because they were installed at different times. They were purchased over many decades as funds became available, often through generous donations of individual parishioners or parish organizations.

Like all Catholic churches of a certain vintage, St. Clare's has undergone several transformations, but much has

remained intact. From the beginning, the church's distinctive carved oak altars have graced the sanctuary. The two side altars in the sanctuary are dedicated to Mother Mary and St. Joseph. The three large statues standing over the main altar are St. Francis of Assisi (a mentor to St. Clare), St. Clare and St. Patrick (patron saint of Ireland, in honour of the church's original parishioners). Traditional oak confessionals still exist at either end of the transept, complete with red velvet curtains. In the two side alcoves are the chapel of the Sacred Heart and the Chapel of the Crucifix. In compliance with Vatican II changes, the original oak communion rails were removed in the 1970s. In the 1980s, a new marble altar and lectern were installed.

A large oil painting of the Baptism of Christ, which was acquired at the time of the church's 75th anniversary, serves as the backdrop in the baptismal area. During the 1940s, the walls and ceiling were painted with highly detailed stencil designs in rich gold and vibrant colours. These designs were subsequently painted over, and many statues and paintings were removed. The tabernacle has moved a few times as well, but is now back on the high altar.

As the 20th century drew to a close, the church underwent a major restoration, thanks to the generous donations of the parish community. Much of the ornate and intricate stencilling work was lovingly restored to its former glory. The magnificent oil painting of the Crucifixion by Guido Nincheri was moved back to its original location above the altar. Many original features remain: the baptismal font, bas-relief Stations of the Cross and hand-painted organ facade pipes.

St. Clare's Church recently celebrated its centenary. To mark this important milestone, Antonio Caruso (an Italian-trained Canadian artist) was commissioned to carve a life-sized wooden statue of our patron saint. It was unveiled on August 11, 2013, the feast of St. Clare, and quickly became a beloved addition to the church's sacred décor.